Skip to content
The Trango Towers are one of the most beautiful and attractive tower in real heaven on earth and it lies on the north side of the Baltoro Glacier, in Baltistan, a district of the Gilgit-Baltistan region of North Pakistan . They are also beautiful part of the Baltoro Muztagh, a subrange of the Karakoram range. The Towers offer the national and international tourists some of the largest cliffs and most challenging rock climbing in the world. 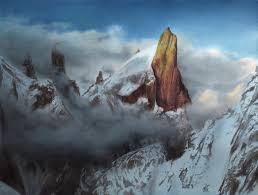 The highest point in the group is the summit of Great Trango Tower, 6,286 meters. The east face of the Great Trango Tower features the world’s greatest nearly vertical drop.
Structure of the group
All the  main Trango Towers located on a ridge, trending northwest-southeast, between the Trango Glacier on the west and the Dunge Glacier on the east. Great Trango itself is a large massif, with four identifiable summits like
1) Main (6,286 m),
2.South or Southwest (circa 6,250 m),
3. East (6,231 m),
4. West (6,223 m).
It is a complex combination of steep snow , steeper rock faces, and vertical to overhanging headwalls, topped by a snowy ridge system.
Great Trango is the Trango Tower (6,239 m), even some tourist and local called  it “Nameless Tower”. This is a very large, pointed, rather symmetrical spire which juts 1000 m out of the ridgeline. North of Trango Tower is a smaller rock spire known as “Trango Monk.” It can be approached  the ridge becomes less rocky and loses the large granite walls that distinguish the Trango Towers group and make the hikers to attracts. Another tower is   Trango II (6,327 m) approached  northwest o 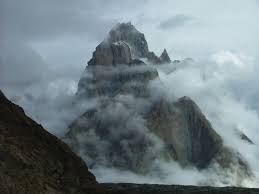 f the Monk, and the highest summit on the ridge, Trango Ri (6,363 m), lies northwest of Trango II.
Like wise southeast of Great Trango  is the Trango Pulpit (6,050m), whose walls present similar climbing challenges to access this.  From  the south is Trango Castle (5,753 m), the last largest peak alongwith  the ridge before the Baltoro Glacier.
Climbing history
Trango Towers group has also seen some of the most tuff  and significant climbs ever accomplished, due to the combination of altitude, total height of the routes, and the steepness of the rock. Only  technical climbs can approach this.
Great Trango
In 1977 it was first climbed  by Galen Rowell, John Roskelley, Kim Schmitz, Jim Morrissey and Dennis Hennek by a route which started from the west side  and climbed a combination of ice ramps and gullies with rock faces, finishing on the upper South Face. The east face of Great Trango was first climbed in 1984 by the Norwegians Hans Christian Doseth and Finn Dæhli, who both died on the descent.
The first successful climb of and return from the East Summit was in 1992, by Xaver Bongard and John Middendorf, via “The Grand Voyage”, a route parallel to that of the ill-fated Norwegians. These two climbs have been called “perhaps the hardest big-wall climbs in the world.”
The least difficult route on Great Trango is on the Northwest Face, and was climbed in 1984 by Andy Selters and Scott Woolums. This is nonetheless a very serious, technical climb.
Trango Towers are a family of rock towers situated in Gilgit-Baltistan, in the north of Pakistan. The Towers offer some of the largest cliffs and most challenging rock climbing in the world.
Trango (Nameless) Tower
In 1976 Trango also known as Nameless Tower was first climbed by the legendary British climber Joe Brown, along with Mo Anthoine, Martin Boysen, and Malcolm Howells. 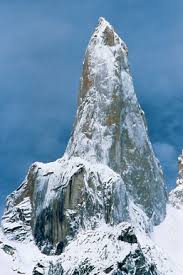 The Pulpit was climbed by a Norwegian team (Robert Caspersen, Gunnar Karlsen, Per L. Skjerven, and Einar Wold) over a total of 38 days on the wall.
BASE Jump
This was the highest starting elevation for a BASE jump on record. The current Guinness World Record for a BASE jump starting elevation is held by Singleman himself and partner Heather Swan for a jump from 6604 meters (21,667 ft) from Meru Peak in northern India on 23 May 2006.
Recent ascents
Some of the more recent ascents on Great Trango have focused on the longer routes found on the west and south sides. In particular, in 2004 Josh Wharton and Kelly Cordes completed a new, very long (2,256 metre/7,400 ft) route on the Southwest Ridge, or Azeem Ridge, to the Southwest Summit. Though not as extremely technical as the East Face routes, the climb was notable for the extremely lightweight and fast (5 days) style in which it was done.
Over 7 days in August 2005, two Slovak climbers, Gabo Cmarik and Jozef Kopold, climbed a new route, which they termed Assalam Alaikum, to the right of the Wharton/Cordes line on the south face of Great Trango. The climb comprised around 90 pitches, up to 5.11d A2. They used a lightweight style similar to that of Wharton and Cordes.
In the same month, Samuel Johnson, Jonathon Clearwater and Jeremy Frimer made the first ascent of the southwest ridge of Trango II, which they termed Severance Ridge. The route involved 1,600 m of climbing over five days, with rock climbing up to 5.11 A2 and ice and mixed climbing up to AI3 M5.
Also in August 2005, a South African team, composed of Peter Lazarus, Marianne Pretorius, James Pitman and Andreas Kiefer, climbed to the summit via the Slovenian route. Pretorius was the third woman to reach the summit.
During May/June 2008, the Norwegian route on the east face of Great Trango (1984) was repeated by the four Norwegian climbers Rolf Bae, Bjarte Bø, Sigurd Felde and Stein Ivar Gravdal, spending 27 days in the wall to reach the summit, and three more days for the descent. This is reportedly the first repetition of the route, and thus also the first successful ascent and return. Rolf Bae died later that summer. He was one of 11 climbers who were killed in the 2008 K2 Disaster.
In mid August 2009, Alexander and Thomas Huber managed to make an all free ascent of “Eternal Flame” on Nameless Tower. This tower is most  dangerous peaks of the world in which many hikers lost their lives while approached these towers.