Skip to content
Masherbrum (also known as K1) located in the Gilgit Baltistan of north Pakistan is the 22nd highest mountain in the world and the 11th highest in Pakistan. 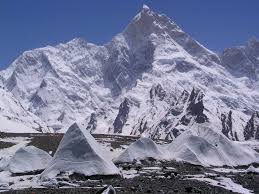 It is the highest peak of the Masherbrum range, a subrange of the Karakoram mountains. It is a large and striking peak, which is somewhat overshadowed by the nearby 8000m peaks of the main range of the Karakoram which includes four of the fourteen Eight-thousanders, namely K2, Gasherbrum I, Broad Peak and Gasherbrum II. The meaning of the name “Masherbrum” is not entirely clear. It may come from mashadar (muzzle-loading gun) plus brum (mountain), from the resemblance of the double summit to an old muzzle-loader. It may also come from masha (queen or lady), giving “queen of peaks.” Other meanings have also been suggested. 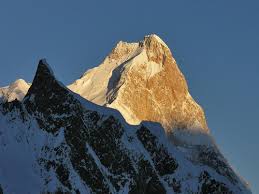 Location of Masherbrum
The Masherbrum range located in south of the Baltoro glacier and the main range of the Karakoram lies to the north of the Baltoro. The Baltoro Glacier is the route most commonly used to access the 8000m peaks of the Karakoram, and most of the hikers  also approached on the Baltoro. Masherbrum also lies at the north end of the Hushe Valley, which can be approach southern range to access the peak.
History of Masherbrum:
In 1856, Thomas Montgomerie, a British Royal Engineers lieutenant, approached and

climb Masherbrum this was then climb in 1911 by the intrepid Dr. William H. Workman and his wife Mrs. Fanny Bullock Workman. It was first attempted in 1938 from the south; the attempt failed just short of the summit.
Masherbrum was first climbed in 1960 by George Irving Bell and Willi Unsoeld, part of an American-Pakistani expedition led by Nick Clinch. They completed this climbing.
There are many other climber who try to climb this peak but only few can reached its destination.