Rakaposhi was first climbed in 1958 by Mike Banks and Tom Patey, members of a British-Pakistani expedition, they used the Southwest Spur/Ridge route to approach this peaks. A few climber also lost their life  during climbing this peak.
This mountain range has also another attraction that it has rarer species such as Marco Polo sheep, Snow Leopard, brown bear and  wolves.
There are magnificent views of Rakaposhi from the Karakoram Highway on the route through Hunza. A tourist spot in the town of Ghulmat also known as  “Zero Point of Rakaposhi” is the closest convenient view point of the mountain 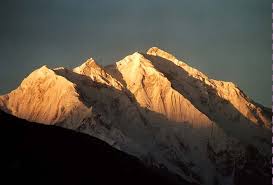 Climbing routes
The routes with successful summits so far have been form the
North Spur and shorter than the above two routes, but much more technically difficult. Has been repeated, including a semi-alpine-style (capsule style) ascent.
Attempts have also been made from the east side (Bagrot Glacier), the East Ridge, and the North Face.
Time line: In 1892 Martin Conway explores the south side of Rakaposhi. 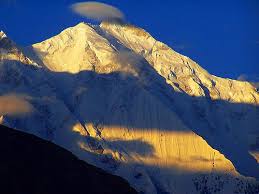 1938 M. Vyvyan and R. Campbell Secord make the first reconnaissance and climb a north-western forepeak (about 5,800m/19,000′) via the northwest ridge.
1947 Secord returns with H. W. Tilman and two Swiss climbers; they ascend via the Gunti glacier to 5,800m/19,000′ on the south-west spur.
1954 Cambridge University team, led by Alfred Tissières, attempts the peak via the south-west spur but only reached 6,340m/20,800′. Also, an Austro-German expedition led by Mathias Rebitsch attempted the same route.
1956 A British-American expedition, led by Mike Banks, reaches 7,163m/23,500′ on the Southwest Ridge, above the Gunti glacier.
1958 The first ascent, noted above.
1964 An Irish expedition attempts the long and difficult Northwest Ridge.
1971 Karl Herrligkofer leads an attempt on the elegant but difficult North Spur (or North Ridge).
1973 Herrligkofer returns to the North Spur but is again unsuccessful due to time and weather problems.
1979 A Polish-Pakistani expedition ascends the Northwest Ridge from the Biro Glacier.
1979 A Japanese expedition from Waseda University, led by Eiho Ohtani, succeeds in climbing the North Spur. Summit party: Ohtani and Matsushi Yamashita. This ascent was expedition-style, done over a period of six weeks, with 5000m of fixed rope.
1984 A Canadian team achieves a semi-alpine-style ascent of the North Spur, using much less fixed rope than the Japanese team had. Summit party: Barry Blanchard, David Cheesmond, Kevin Doyle.
1985-1987 Various unsuccessful attempts on the long East Ridge.
1986 A Dutch team climbs a variation of the Northwest Ridge route.
1995 An ascent via the Northwest Ridge.
1997 An ascent via the Southwest Spur/Ridge (possibly the original route).
2000 An attempt from the East side (Bagrot Glacier).
2003 A Mountaineering expedition team of Chiltan Adventures Association
These are the main and important climber who approach Rakaposhi.