Skip to content
Gilgit-Baltistan an heaven on earth which was formerly known as the Federally Administered Northern Areas (FANA)  is the northernmost political entity within the Pakistani-controlled part of the former princely state of Jammu and Kashmir. Presently

Gilgit-Baltistan is  given the status of as indenpendent province of Pakistan and this beautiful region is also have world’s highest mountains, including five   (5) of the eight-thousanders The main tourist are focus and their attention  is the world’s three highest mountain ranges–the Karakoram, the Himalaya, and the Hindu Kush, with five peaks over 8,000 meters and many peaks over 7,000 meters, and having the largest glaciers in the world which are also attratctive and lies other than those in the polar region. This heaven on earth muntanious rage has wild rivers and unique landscapes make this area a “Mountain Paradise or Heaven On Earth ” for mountaineers, trekkers, and tourists.
These beautiful area lies an elevation of 1,454 metres of the well known Gilgit Valley. This attractive  valley quaint little town of Gilgit has spectacular scenic beauty. The peak tourist season started from May to mid-October and  mountaineers, trekkers, and tourists season is round the year. The maximum temperature in May is 16 C to  33 C . In September minimum temprature is 11C and the Maximum range is 28 C only. 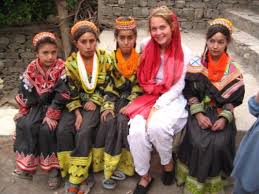 The Gilgit-Baltistan was given Empowerment and Self Governance Order, 2009 approved by the federal cabinet on 29 August 2009, through which Pakistan officially granted full autonomy to the former Northern Areas or North Pakistan which these people of north Pakistan is struggling for autonomy since Independence 1947. After this  new a new name was given that is “Gilgit-Baltistan”. This is  long-standing demand of the residence of this area to change the name of  Northern Areas to Gilgit-Baltistan.
In infect the government deserves some credit for making a new an independent status for North Pakistan and this status also a good step of recognizing of local for there is such a thing as Gilgit-Baltistan and moving to redress and reduce the grievances of the locals against the system timely delivery of justice. Due to absence of a high court in Gilgit-Baltistan also compel the local to go to Islamabad to seek justice.
Gilgit was an important city due to beautiful and only connected road that is  the Silk Road,  The world top most and well known two travellers, Faxian and Hsuan Tsang, are also known to have traversed Gilgit as per their accounts. Gilgit was ruled for centuries by the local Trakane Dynasty, which came to an end in about 1810. The area descended into internecine turmoil before being occupied by the Sikhs in 1842. It was ceded to Jammu in 1846. Gilgit’s inhabitants drove their new rulers out in an uprising in 1852. The Khushwakhte Dynasty of Yasin and Gulapure led the people of Gilgit to drive out the Dogra rulers. After Yasin was conquered by the Katur Dynasty of Chitral, the power of the Khushwakhte was crushed. The rule of Jammu was restored in 1860. Gilgit came under British rule in 1889, when it was unified with neighboring Hunza and Nagar in the Gilgit Agency.
In 1947 when British rule came to an end  and this beautiful region was briefly handed back to the maharaja of Jammu and Kashmir. Subsequently, it came under Pakistani control and now this area became the status of a province namely Gilgit-Baltistan.

One thought on “Gilgit-Baltistan”